For those of you unfamiliar with the NBVL format, Below is the video from the Inaugural season detailing how the NBVL works! (Just remember it is now 3 players per gender per team) 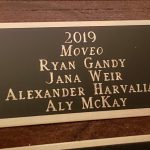 If you thought the season ended with the NBVL Trophy, then you were mistaken. There was still one final tribute to the players of the Inaugural Season, sponsored by WeCoBeVo. On Friday night, the ended of season awards were handed out, recognizing the stand out performances from the regular season. Below is a list of the NBVL’s Inaugural Season award recipients.

First was the WeCoBeVo Male and Female Top Scorer awards. West Coast Beach Volleyball Society supports athletes from Western Canada who want push themselves through difficult conditions to become top performers in the sport. Top Scorer recipients exemplify this, often by thriving under the pressure of being targeted by opponents, and then going the extra mile for their team by consistently earning points defensively as well.

For the Regular Season All Stars and MVP, players and Owners involved in the Inaugural Season were asked to vote for their top 5 MVP candidates. Each 1st place vote received 5 points, 5th place votes received 1 point, giving all players an all star point total. So the MVP, 1st and 2nd Team All Stars were chosen by their peers as this seasons top performers.

Congratulations to all the NBVL’s award winners! And so concludes the NBVL’s Inaugural Season. 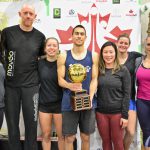 It was only a few days of beach volleyball over what seemed like a very quick month of January, but the drama built up perfectly for a thrilling conclusion only 2 weeks ago. There was certainly more drama than the Championship Sunday (NFL) that followed. Apologies for the delay in publishing this write-up, but I’ve made sure to make it extra thorough.

The regular season came down to the final day of matches, but ultimately Dunbar Cycles and Active ReLeaf couldn’t do enough to make it through to the money rounds. Volleyball BC snuck into the 4th seed, needing to win their last 3 Matchups in a row to steal the last playoff spot, and earn a semi finals date with top seeded Volleyball Stuff. The latter pulled ahead of Moveo in their final regular season meeting. It was Moveo’s only loss of the season, but it was enough to drop them into the 2nd seed, where they lined up against 3 seed, Natura Solutions.

All in all, the regular season oved smoothly. Teams were feeling each other out at the beginning, and each day seemed to be played with a little more fire than the last. Players started getting into it a little more. Strategies developed for the new Overtime format. A few more fans started to come out to watch each time. Teams were building chemistry, and working together with their gender counterparts in ways that haven’t happened before. But none of it compared to Playoff Sunday.

The best was truly saved for last. Starting with #1 Volleyball Stuff vs #4 Volleyball BC. Right from the start, you new this matchup was going to be a nail biter. On the women’s side, we saw the top 2 drafted players (Kumiko Chow and Denise Wooding) pitted against one another. Kumi alongside super athletic Katie Wuttunee for Vballstuff, and Denise paired with the hard hitting Meghan Brown for VBC. The last time the 2 men’s pairs had played in week 1, VBStuff had pulled a crazy 3rd set comeback to win, but this was before the addition of Krzyzstof Orman to VBC.

The matches didn’t disappoint, both first sets going into extra points and VBC going up 1-0 on both courts. VBStuff was not going to lay down, however, winning set 2 on both courts and set both matches to the deciding 3rd set. Volleyball Stuff drew first blood, winning the women’s match 15-13 on a dig and transition kill from Kumiko Chow. Jonny Wiskar would answer shortly thereafter with an ace to seal the men’s match 17-15 for Volleyball BC, and send both teams into Overtime. The alternating points seemed to suit Vball Stuff early on, and they were able pull away point by point until the eventual 15-10 Victory, to book their spot in the NBVL Inaugural Season Finals. VBC fought hard to earn their playoff berth, but couldn’t keep their run alive, finishing 3rd and walking away with $500 to split.

The next semi was similar, and yet very different. The way #2 Moveo vs #3 Natura Solutions started it seemed like things could be over quickly. Jared Krause and Murf Laidlaw got off to a very fast start for Natura, dominating the first set over the Moveo men, winning 21-12. On the other court, it was Moveo that got off to the early lead, starting up 8-1 and later 12-6, but Joanna Braun and Jaz Kim hung tight and rallied back, evening the score at 13-13 and eventually pulling through in the first set with a 21-19 finish to give Natura the edge in both matches.

Moveo refused to give up on either court, however, and similar to the first semi final, both matches were pushed to the 3rd set. Natura Solutions would prevail in the men’s match, and a Jana Weir block would ice the women’s match for Moveo, giving the fans what they wanted, a 2nd semi final overtime. Neither team wanted to back down, but Moveo’s balanced men’s and women’s pairings edged them ahead of their opponents, ending Natura Solutions season in 3rd place.

So the finals stage was set. #1 vs #2. Volleyball Stuff vs Moveo. Kumiko Chow and Katie Wuttunee vs Jana Weir and Aly McKay. John Galloway and Joel Caschetto vs Ryan Gandy and Alexander Harvalias. The best 2 teams from the regular season proving that their rankings were deserved. After a brief rest, they were ready to face off in front of a full 6 pack crowd.

On the women’s court, Kumi and Katie struck early and often. They had an answer for everything that Jana and Aly could throw at them. It was the first straight sets match victory of the night 21-14, 21-16, and in doing so Volleyball Stuff confirmed the strength of their women’s pair, as the only duo to remain unbeaten in regulation play all season. But it takes more than one pair win the NBVL crown, and so all eyes turned to the men’s court, where Gandy and Harv needed to find some magic to keep their team alive. Magic which they were able to find, gutting two straight 2 point wins 21-19, 21-19, and sending the NBVL Inaugural Season Finals, fittingly, into Overtime.

Up until the finals, Moveo was unbeaten in Overtime play, winning their previous 4 such matchups. Volleyball Stuff had a 2-1 Overtime record, but in the previous matchup between the 2 teams, no extra play was needed as VB Stuff had won in 2 straight matches. In the early goings it seemed like the Moveo magic would continue, going ahead 10-7, and then 11-9, but just like that the tides changed as VBStuff rattled off 4 straight points, giving them a 13-11 lead out of nowhere, and really demonstrating how impactful each earned point can be in the NBVL’s Overtime format. It seemed like the momentum had shifted enough for Stuff to taste victory, but Moveo was undeterred. They managed to seal the championship with a never bigger 4 point swing of their own, and the 15-13 OT win. Volleyball Stuff had come so close, but would walk away in 2nd place, splitting $1000.

It was a victory for Moveo, and for the NBVL in it’s inaugural season. The finals proved that it takes teams competing together to win a championship. Moveo could boast neither the strongest male, nor female team, as individually, both teams finished the season with records only slightly above .500 in regulation play, but working together they were unstoppable, with a perfect 5-0 in overtime performances. Chalk it up to the veteran savvy of Ryan Gandy and Jana Weir, or the youthful energy and exciting play of Harv and McKay, or possibly the foresight of Moveo’s all female management team of Lisa Tam, Sarah Jung, and Felicia Culham who saw the potential and drafted the NBVL’s first ever championship team. Whatever the keys to success, here’s to hoping it sparks future conversations about beach volleyball, and future exciting seasons for the NBVL.

Young Fitness
This site is a Game of Skill and is 100% LEGAL in the United States. This site operates in full compliance with the Unlawful Internet Gambling Enforcement Act of 2006.
Due to state and provincial laws residents of Arizona, Iowa, Louisiana, Montana, Vermont, New York and Quebec may only play in free competitions. All other trademarks and logos belong to their respective owners. FanVictor.com Fantasy Sports