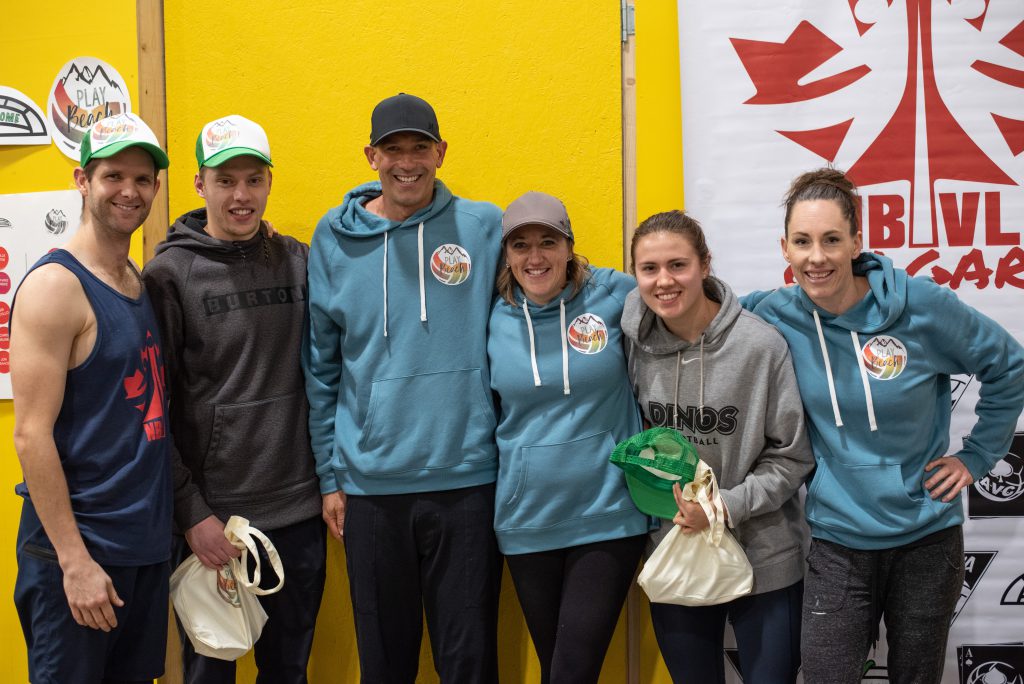 Last but not least of the team previews in the NBVL Calgary, is PlayBeach. A start-up beach volleyball company spurred into creation by the NBVL itself. With 2 player/owners, they already had a core to their team going into the draft, so their strategy was to complement what they already have. Did they pick the right pieces to build a winning team wearing Green and Gray?

Hailey Funk answered the call to become a team Owner almost instantly, just didn’t yet know which company to represent. So her, Amanda Moppett-Beatch and Hailey’s husband, Mike Funk, have started PlayBeach, to encourage more beach volleyball everywhere, starting with the team they are co-running this season.

Scott Lahey is the most experienced player in the NBVL Calgary. He’s represented Canada in International Play, he’s been at the top of the Alberta beach volleyball scene for over a decade, and he’s reached the podium in several of Canada’s most prestigious events, including silver at the Canadian National Championships and a Vancouver Open Bronze. As the founder of Playfit wellness, Lahey also takes pride in his fitness, and showed it during the combine, with the 2nd fastest time in the agility station. To top it all off, Lahey and Mike Funk have a pre-existing rapport on the sand, so when it came time for PlayBeach’s 1st pick at 4th overall, with Scott still available, it was an easy decision.

Moppett-Beatch was a mandatory 2nd round pick by virtue of her player/ownership, though she would certainly have been considered in round 1 had she been available. 2 Canadian national Silvers and a Vancouver Open Gold prove that she can play with anyone in the country, and some FIVB Satellite top 10 finishes prove that she was no slouch in her exploits beyond borders either. As the cherry on top, Moppett-Beatch dominated the combine, posting top 5 results in every testing category, including the top overall squat throw. She’ll look to put that all together to help PlayBeach be at their best in the NBVL Calgary 2020 Season.

Mike may be the oldest player on the men’s side in the NBVL this season, but he’s used his time to become one of the all time greats on Alberta beach courts. He couldn’t be beaten provincially, spanning a couple of years, from ####-##, which is no small feat. The NBVL will be a whole new arena for Funk to show off what makes him great. Getting to do it for PlayBeach, a company that he co-founded, is icing on the cake.

MacKenzie was one of only 3 athletes that couldn’t make the combine, but that didn’t make her any less valuable when it came time for PlayBeach to make their 2nd unforced pick at 13th overall. Ashtyn has proven herself by earning a bronze at the Alberta Provincial Championships in 2018, and taking 1st in a CBVA tier 1 event. One of the younger players in the NBVL Calgary, she’ll be able to learn a lot from her veteran teammate, Moppett-Beatch.

Woelfel brings a youthful edge to the PlayBeach men’s team. He’ll be behind Lahey and Funk to start things off, but will have the ability to step in when it’s his time. He has multiple Sandblaster medals, Bronze at Alberta Provincials in 2016, and Gold at U18 Alberta Provincials in 2013. With 2 veteran teammates, he’ll have such a good opportunity to learn every time he takes the court, it wouldn’t be surprising to see Woelfel grow in leaps and bounds as a player this season.

Gordey was the 6th round pick for PlayBeach at 21st overall, and was the youngest drafted athlete in the NBVL Calgary. She has a ton of youth Team Alberta beach experience, where she’s achieved multiple Provincials medals and National quarter final performances. Gordey will be hungry to get on the court this season, and show

PlayBeach has a combination of youth and wisdom. The team will be led by veterans Lahey, Moppett-Beatch and Funk, with the youthful spark of MacKenzie, Woelfel and Gordey to keep them going. The men should be one of the most consistent teams this season, with a long history of success. The question mark will be how quickly Moppett-Beatch can gel with her young teammates, to make PlayBeach competitive against the stacked women’s field in the NBVL Calgary.